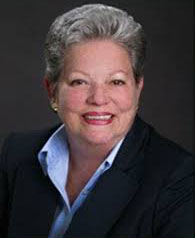 Ellen Roberts is a native Floridian, born and raised in St. Petersburg, Fl. After graduating from St. Petersburg High School, Ellen proceeded to St. Petersburg Junior College and then the University of Georgia, with a degree in journalism. She married and moved to Germany with her husband and became a teacher for the United States Army while stationed there.

Upon her return to the United States, she completed a Masters degree in Education and then completed her Juris Doctorate degree from Nova Southeastern University.  Ellen began working for the Palm Beach County State Attorney’s Office in 1986.

In 1993, Ellen was instrumental in creating the Traffic Homicide Unit, which was responsible for investigating, reviewing and trying fatal criminal traffic cases. From its inception until her retirement in May 31st of 2012, Ellen was the Chief of the Unit. She investigated and tried hundreds of fatal traffic crashes. During her tenure as Chief, she continued to advance her education by completing over 500 hours of accident reconstruction training from the University of North Florida. She is a specialist in Forensic Mapping and Crash Data Retrieval.

This additional training provides Ellen with the essential tools necessary to execute an effective cross examination of defense expert witnesses. Ellen has lectured and presented on numerous occasions primarily in the area of investigating and prosecuting traffic homicide cases throughout Florida for the Institute of Police Technology and Management, Florida Prosecuting Attorney’s Association, Florida Highway Patrol, MADD and numerous other organizations. During the 26 years as a prosecutor, she tried well over 100 jury trials, with the majority of these being high profile trials involving traffic fatalities. Ellen concluded her career by prosecuting John Goodman, the founder of the International Polo Club. The prosecution of Goodman for killing Scott Wilson received worldwide media attention. Ellen has received commendations from such prestigious organization as MADD, Florida Prosecuting Attorney’s Association, Traffic Safety Commission and in 2011 she received the most significant award of her career, the National Highway Traffic Safety Administration, Prosecutor of the Year Award.

Eight years ago, Ellen started a program where young people convicted of DUI manslaughter tell their stories in schools rather than going into prison. It has met with great success. When not working, Ellen can be found kayaking, taking photographs or spending as much time as possible with her grandchildren.

Ellen Roberts’ vast knowledge and training allows her to make significant recoveries for her clients and continue her career-long fight for accident victims and their families.